So it’s a little old, but cool nonetheless and more people need to see this to realise how awesome it could be.

American company MegaBots build human piloted robots for robot fights because why not? They’re especially proud of their Mk.II Megabot and have called out Japanese company Sudobashi Heavy Industries for a bout against their awesome looking Kuratas.

This could be it folks, this could be our future favourite sport. This takes robot wars and up’s the ante. 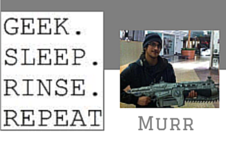