One In A Billion

My eyes opened in the in the pitch black, all I could hear was an intermittent beeping sound followed by a soft green glow illuminating the room slightly. I tried to turn to see the source of the light but my neck was held in place by something. I lift my hand to to feel what was obscuring me and felt something pulling at my hand as it moved – something attached to me. I fumble in the darkness to feel what is on my hand and feel a small cylindrical object on the back of my hand. As I touch it, I feel it tugging at my skin like part of it is inside my hand. Panic starts to take a hold of me in my foggy state of mind, where am I? What is happening?

My panic starts to deepen as I realise I can barely move the rest of my body and my thoughts start to grow ever more ludicrous as to why I’m here. I pull the cylinder at my hand and it starts to come away, it burns as I pull and I feel a needle emerging from my hand, liquid drips from the end of it as it comes free. The beeps from the machine quicken and it feels like they’re louder now too. Just as I feel like I’m about to have a full blown panic attack a light flickers and buzzes on and a voice calls out “Sir, please, try to remain calm, you’re ok.” the voice was male, and sounded young.

The lights damn near blinded me “What’s going on?” my voice came out cracked and dry.

“You’re in the hospital, you were in an accident, please try to calm down.” The voice was quiet and steady, reassuring, I felt my body relax a little.

“Why can’t I move?” I asked almost not wanting to know the answer.

“It’s ok; you’re just secured so you don’t move about too much and injure yourself. Do you remember what happened to you?”

I tried to think about the last thing I could remember. I remembered sitting and eating, then talking with someone about work. Silver – the word silver rang a bell.

Then I remembered dropping out of supercruise and seeing a warzone. Multiple ships all engaged in combat, all around me. I remembered being shot at, and the distinctive sound of my ship cracking breaking up, the sound of glass as it began to shatter in front of my eyes, the pain from burning and then nothing. Just… black. 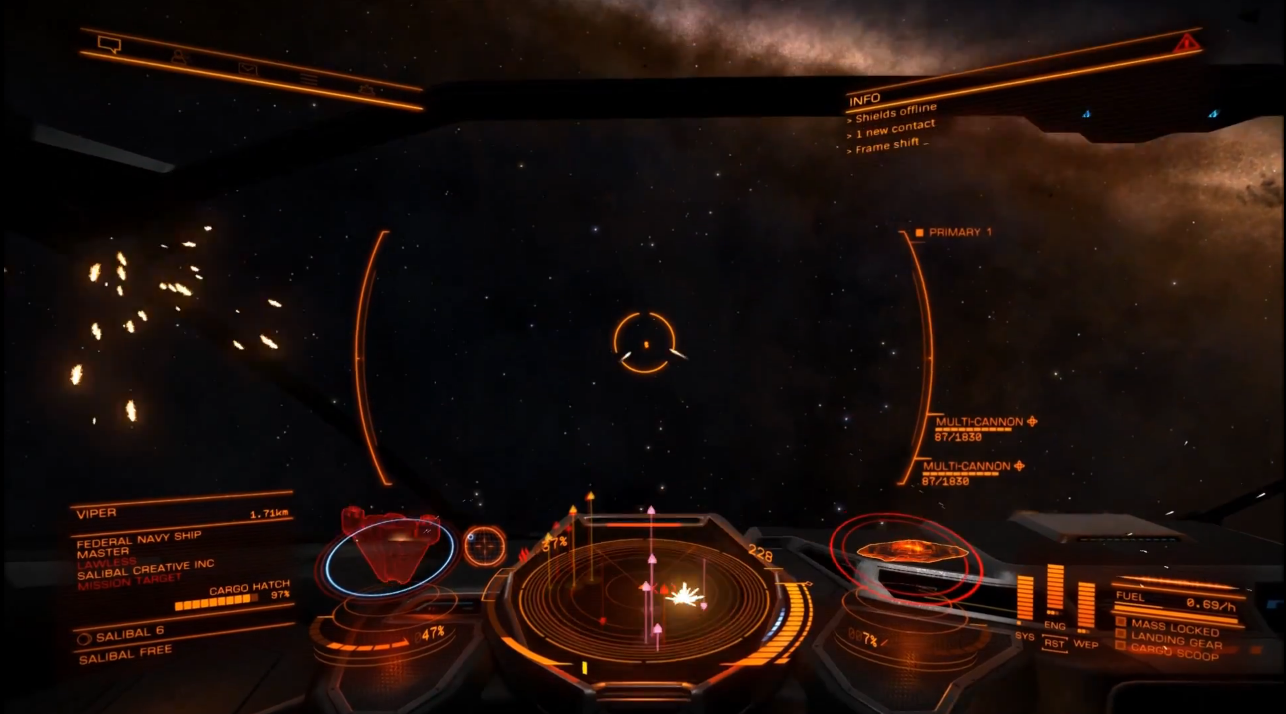 “I remember a little.” I said feebly.

“Ok, let me fill in the blanks for you. My name is Doctor Hines” He looked a lot older than he sounded “I’ve been keeping my eye on your for the last 5 weeks.”

Doctor Hines went on to explain that the mining site had come under attack and I was unlucky enough to be caught up in it, that when my ship had broken up I was separated from it. Somehow a friendly pilot had spotted me or picked me up on their scanner and scooped my up in their cargo hold “It was a good job they weren’t carrying anything else” he said. It was a one in a billion chance that I was still alive.

He told me that I had a broken leg, four broken ribs, burns covering most of my torso, multiple lacerations and that I’d been out cold ever since.

“You’re leg and ribs should be mostly healed now  and the bandages for your burns and cuts will come off soon too – we have the best medical facilities and treatment around.  You will need some physio to get you back on your feet though. We can fix bones in no time, but you’d be surprised how quickly your muslcles forget how to work. Plus we need to make sure you’re ‘fit to fly’ which involves a lot of simulation and scans” Doctor Hines informed me.

“How long will that take?”

“It could take you a few weeks. It really depends on you.”

Over the next week I worked with a physiotherapist to help me get back on my feet – literally. Every few hours or so I had to do exercises, they’re painful at first and I tire quickly. But I can also feel myself becoming more stable and stronger, I guess the muscle damage wasn’t too bad after all.

On the 9th day a lady in a military outfit comes in to my room, she bares a large toothy smile “Hello Commander, glad to see you feeling better.”

Alicia Grey – the memory of her comes back in an instant and with it a flush or anger. She was the one that got me in this mess, she sent me in to that death trap and she probably knew what was going to happen.

“Firstly, let me extend my humblest apologies to you. I feel I am somewhat responsible for you being in that bed, but I assure you had we know what was happening we’d never have sent you in. But it’s not all doom and gloom. I have some good news too.”

“You’re ship.” She continued. “I’m sure you’re aware that it was completely destroyed. But on behalf of Sailbar Silver Council” Silver! That’s why it rang a bell. Alicia continued  “I can have it replaced in full for a fraction of the cost due to your insurance that you’re applicable for after working with us. Isn’t that good!

Never fly what you can’t afford to lose. Something any pilot worth their salt would tell you. This wasn’t exactly news to me.

“Is that all you came to tell me, because I already knew that.”

“And to see how you were doing.” Alicia said sounded a little offended by my tone.

“As you can see, I’m on the road to recovery. Now I just want to get fit and be on my way. So if you came here looking to offer me more work I’m not interested, I need to get moving, I need to get home.”

“Well, I shan’t keep you any longer. If you’d just sign these forms to confirm that you’re happy with the care that has been provided – so you can’t sue us at a later date, then I shall be on my way. Good luck to you Commander Hudson.”

Once I’d signed the forms Alicia swept them up in her hands and bundled them in to a file. She straightened out here shirt and said “Good bye.” Then she turned and left the room.

With no one in the room it became so eerily silent, it was times like this I wish I had some sort of view and not just four walls with a few pictures here and there. I sat back on my bed and let sleep take me.

I worked tirelessly, over a few weeks to get back to a decent level of fitness and ran so many simulations I could almost do it with my eyes closed. The tests to see if there was any lasting damage in my head or anywhere else were all fine and eventually I was cleared as fit to fly.

“So I can leave now?” I asked Dr Hines as he finished up typing his notes on to his personal computer.

Over the last few weeks I got to know Dr Hines a little better, he was a cheerful person always smiling when he came in to my room, he was always calm and very patient. He’d been working at Alpers for almost 15 years and before that he’d jumped from place to place not really staying anywhere more than a few months. He was in his late 40’s now and he said he wanted to ‘explore the stars’, but he also needed to make a better living and that’s why he settled on Alpers. One day he wanted to start a small Surgery in the less inhabited reaches of space – for a quiet life.

Through all his travelling he hadn’t really been in one place long enough to start any kind of family, but he was happy with that. He’d always said how he like being alone and that he cherished his time when he could just sit in the quiet with a good story to read “Usually ones about Thargoids.” He liked to joke.

He ran his hand through his grey hair and looked up “Yes, you can leave now, and as much as I like you, I hope I don’t see you again anytime soon.” He joked.

“Don’t worry; I feel the same way about you. Thank you for all that you’ve done for me.”

“Hey, I just fixed your bones; the rest of the work was my team and you, up here.” He tapped his finger to his temple. “You’d be surprised how many patients I see who just don’t want to get better. I hope you make it home soon Commander.” He extended his hand to shake mine, and gave a courteous nod then turned around and left the room.

I didn’t have any belongings to pack, everything I owned – which wasn’t much, had been destroyed along with my ship. The hospital had ‘donated’ some clothes to me, but I needed more, along with a few other supplies to keep me going on my travels.

I left the hospital and felt an odd sensation take over me. For almost eight weeks I’d been in one place, mostly one room, training, exercising and flying simulations. It was strange to see different sights and different people. I set off towards the nearest market to pick up supplies to ready myself to leave.

After a few hours I was done gathering everything I needed and started to make my way to the docks.  A twenty minute walk, which started to tire me out a little, I arrived at an information point where I was able to search for my new ship using the access and insurance codes I was provided. Once I found what docking bay it was in, I quickly made my way to it.

Stepping back on a ship felt strange, I’d been doing a lot of simulations, but stepping on the real thing after being out of action for so long was almost alien to me. I walked to the cockpit and slid my hand over the chair, I felt a wave of nerves rush over me. Was it excitement, or fear? I sat back in the seat and gripped the the flight stick and throttle, they were cold and unfamiliar. It didn’t feel like my ship, if felt like a rental.

I started to run through my pre-flight checks, and set the ship to return to the surface of the station. The loud mechanical clunking and the judder of the ship as it swung around made me jump, I could feel my palms start to sweat as I emerged in to the station. There were ships flying around me, announcements being made, blinking lights everywhere, it was all so loud. It was almost to much to take in, part of me wanted to return back to the hanger. But I took off slowly. I started to drift forwards and almost hit one of the smaller control towers. “Get a hold of yourself.” I mumble to myself.

Slowly but surely I make my way out of the letterbox opening of the station, just quickly enough to avoid being fined for loitering. I bring up my galaxy map and tap in Leesti, plot the fastest route there. It’s only 7 jumps away, I engage the hyperdrive and accelerate.

Ant-Man and The Wasp (Ant-Man 2) Announced