You might want to go on to YouTube, find the Ghostbusters theme tune, hit play and then come back and start reading! Don’t worry I’ll wait for you!

Ok, are you ready? Lets go.

I like to think that if you’re over the age of about twenty-five you probably watched Ghostbusters when you were younger. I’m sure there are also a lot of people younger than that who’ve watched it too – although chances are it might be because someone older than you told you to, right?!

I am one of those who watched it as a child and I really liked it and I’m pretty sure at one point I probably wanted to be a Ghostbuster. Well now I can be – kind of, in the form of the Ghostbusters board game from Cryptozoic Entertainment.

Play as one of your favourite characters from the Ghostbusters franchise in this co-operative board game for up to four players. However, you have the added bonus of being able to play it on your own if you fancy it. Although, it is much more fun to play with others. If do play with less than four of you, you still control all the characters – so someone has to take on the responsibility of controlling two or more at once.

Opening this box for the first time was a pretty satisfying affair, seeing all the miniatures (over 50 of them) lined up just made me want to play it more, they all look really good too, nicely detailed and brightly coloured.

When you first start out you’ll need to pick a scenario to play through – there are quite a few to choose from too. We decided to start out with what looked like an easier one and picked a four stage campaign that involved capturing Slimer. Each scenario card has a set layout for the board which you assemble as it describes using the tile cards. You then have to set it up with all the ghosts, portals, starting points and a few other bits and bobs.

Each scenario has a win state and a fail state, for us we needed to close the portals on the map. There can also be a number of other rules based on the scenario which can involved altering specific ghosts abilities or changing what happens when you perform certain actions.

I spent a good hour reading through the rules before heading round to friends to play and I still wasn’t completely sure I understood them, this isn’t because the game is overly complicated I just think the manual went about explaining things in a slightly convoluted way. I also think it helps to just learn whilst you play.

After explaining half of the rules and shrugging at a lot of questions we decided it was better to just get to it.

Each round you all take your turns, during your turn you have two action points and can either decide to move around the board, attack targets, deposit captured ghosts or remove slime from allies, each one of these consumes one action point. All of these actions need to be thought about with the team in mind as some players have special abilities on their character cards that grant them specific bonuses like gaining experience from removing slime from allies. Once you’ve completed your turns, you roll an event die which can either move some of the ghosts around the board or add more ghosts to the game world from the spirit world – it came to be known as the death die for us as we had terrible luck with our rolls and it would constantly place us in immediate peril.

If you take the option of combat, firstly you need to  be within line of sight, which is up to three spaces away. Then you’ll need to roll your own die to see if you gain a hit and can add a proton stream to your target. Each ghost has different rules for how many streams it needs to be captured and what happens if you miss. As I said we were having terrible luck with our rolls so we missed a lot. On the plus side my character had an ability that added xp when ever I rolled a one – and I rolled a lot of them. When you do miss, some of the ghosts move towards a player and if they ‘hit’ you or pass through you, you get slimed, this decreases your action points until you either remove them yourself or have someone do it for you.

Eventually we managed to work our way through the first two scenarios and were all around the level three mark.

As you perform actions like capturing ghosts and depositing them in to the Ecto-1 you gain xp, each character has five levels with new abilities for hitting each level. The scenario we played allowed us to keep our xp when starting a new board, but other scenarios can have different rules.

We were about to start the third scenario in the campaign, but when we saw that it was pretty similar to the last two and as it was getting late we decided to skip it and head to the final encounter – Slimer! 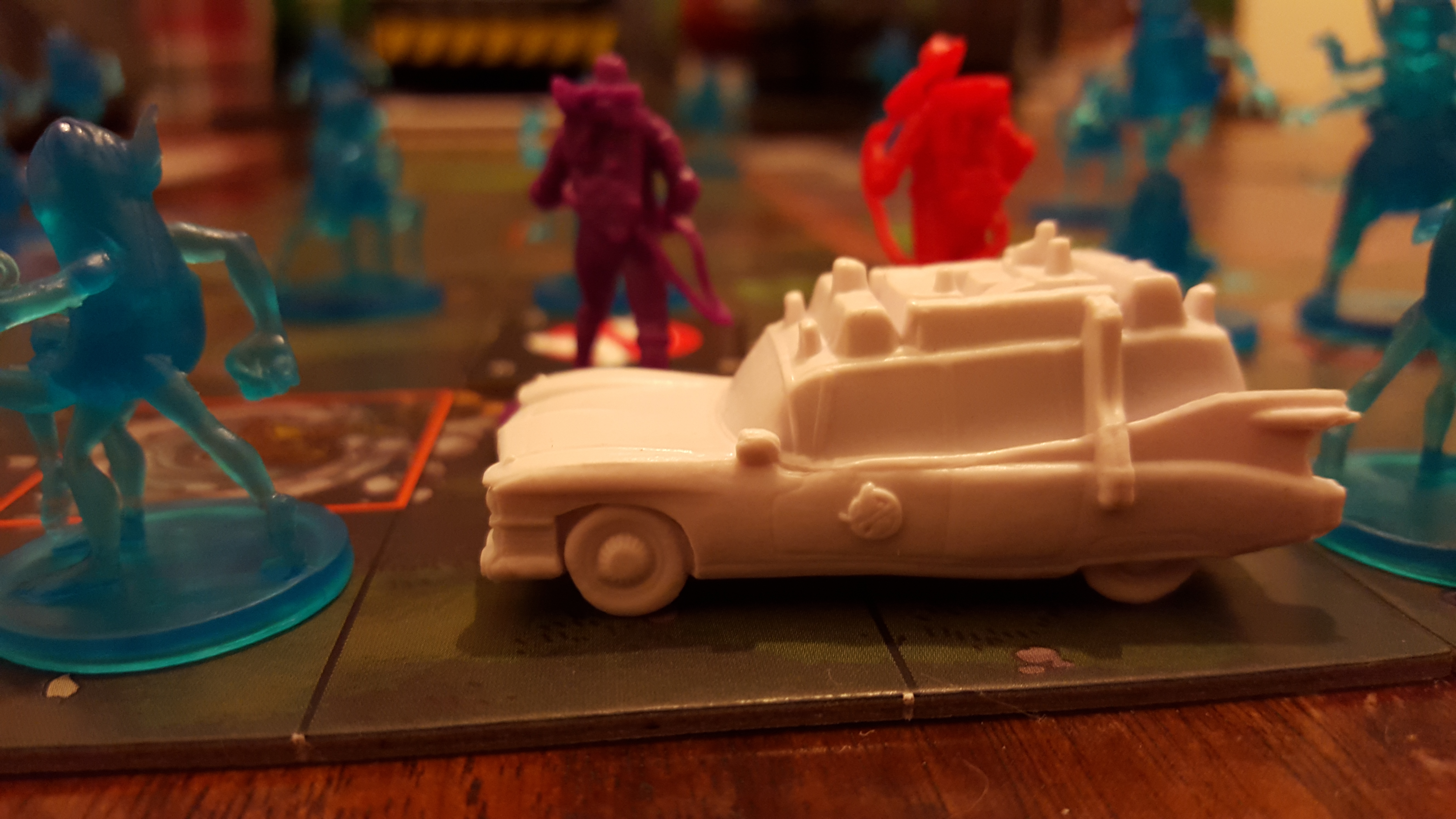 This was our first boss encounter and boy was it different. Our objective was to capture Slimer but only after we had closed all the spirit portals on the board. Slimer however moved after every turn which took him closer to slime gates which make him stronger and hard to beat. If he hit all four gates before we could capture him, we lost. Needless to say we lost.

The final round was very different and needed a much higher level of tactical play and as we were new to it I don’t think we really made many good decisions. But it was still a lot of fun despite the loss.

It’s one of the more expensive board games with an RRP of £70 – although you can find it cheaper in some places if you look hard enough. But it’s also a great game, all the parts look really cool, it plays really well making you work as a team, trying to stay one step ahead of the ghosts. I can see myself playing this one quite a lot in the future. Plus it has some extra boss packs available where you can add some new bosses to the game once you’re done beating the three available in the base game.

In total we played for around three hours across the Slimer campaign, so be ready to clear some time in your schedule if you’re looking to play. But, if you’re one for having lazy Sundays where all you do is play board games, then this is definitely one you can add to the collection as it will keep you busy for hours.

There is just one more bonus to talk about too. If you complete all the scenarios included with the game you can create your own custom scenarios with the Random Scenario Generator – pretty sweet addition if you ask me!

Most Anticipated Games of 2016