Dreadball is the kind of sport you’d expect to see in Sci-Fi film, where you have a jock character playing the lead role as the Captain of the team – by day he’s cracking heads and leaving his opponents with bloody noses, taking home the MVP trophy and being an all-round hunk. But by night he’s probably off fighting aliens or infiltrating some underground Cybperpunk gang. If you’re reading this Hollywood, you can buy this idea off of me for £10 million. 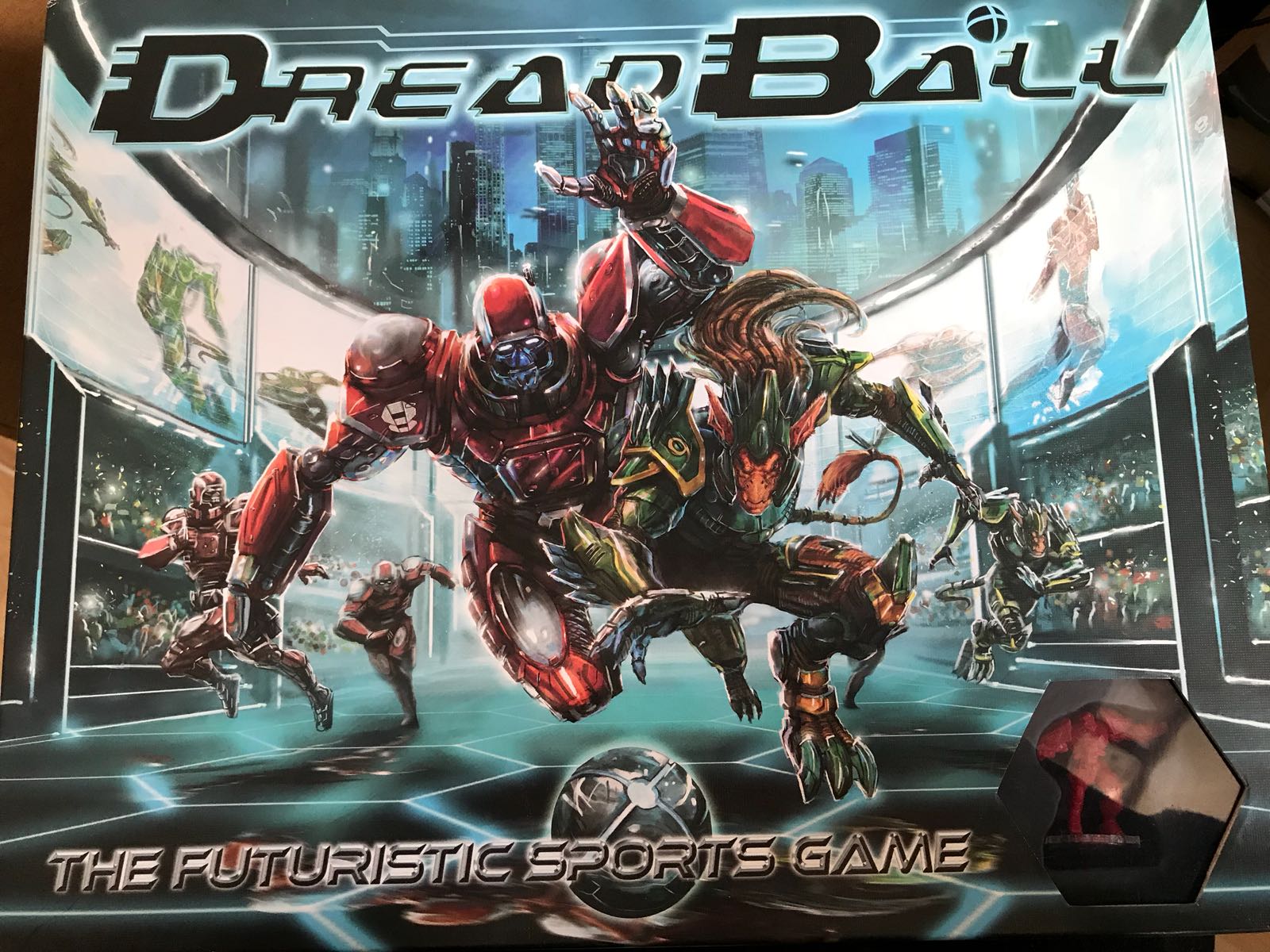 In Dreadball two opposing coaches compete for victory taking over one of the two teams included in the base game – Ninth Moon Tree Sharks or the Draconis Allstars. There are a whole bunch of other teams you can buy separately too that will let you pick and choose what kind of team you want to play as, but functionally they will play mostly the same. Each team also has a Captain available to them which allows you play with a few more complex rules.

Dreadball mixes up the gameplay with easy to learn rules but difficult to master tactics and a bit of luck with dice rolls thrown in for good measure. A game will last 14 turns with each player having 7 turns, during each turn you will have five actions that you can distribute out to your six on field players how you see fit. Essentially your objectives is to score more points than your opponent and to do that you’ll need to utilise good passing, good runs, and good blockers to get in to the right positions on the pitch to get upper hand over your opposing coach. On the pitch are marked zones where you can shoot from and depending on how far away you are will determine how many points you will get for a goal.

During your turn you’ll be able to perform actions like Slamming and opponent, tackles, passes, taking shots etc, each move is clearly explained in the rule book with a quick reference guide close by making the gameplay feel fast and frantic. You also have the choice of using cards and these will give you little perks like being able to take an extra action during your turn, they add a nice extra layer of tactical play and open up a few alternative options when trying to outsmart you opponent. To perform actions you will be rolling dice, so there is a bit of a random element to the game, and you will basically build a dice pool depending on the action and whether you character is good at said action i.e. Strikers are good a shooting so can take extra dice to shoot.

There are three types of player in each team Striker, Guard, and Jack. The strikers are the ones who will do things like running, passing and shooting. The Guards… well guard, and will slam opponents, knock them over or injure them – don’t worry they can come back using the substitute system. Jacks are a mixture of both, but aren’t quite as good at the action as the other two – they basically get less dice.

Our first game went very quickly and I got pummelled and at first I thought we were doing things wrong, but it turns out I was just bad and employed bad tactics. But I found myself regularly dropping the ball which then launches it off in random directions and it would end up in my opponent’s hands or close by. Personally I didn’t like this part of the game, at times it felt like I had no control over where the ball would go and if you’re on an unlucky streak it can feel pretty damaging. But as I said, I wasn’t really planning my moves all that well and with a bit more experience you can start to avoid these silly mistakes. For the most part the random play doesn’t have too much of a negative impact and it does tend to balance out over the course of a game. For the most part if you make or plan a good play you will get the rewards for it which is what you want. 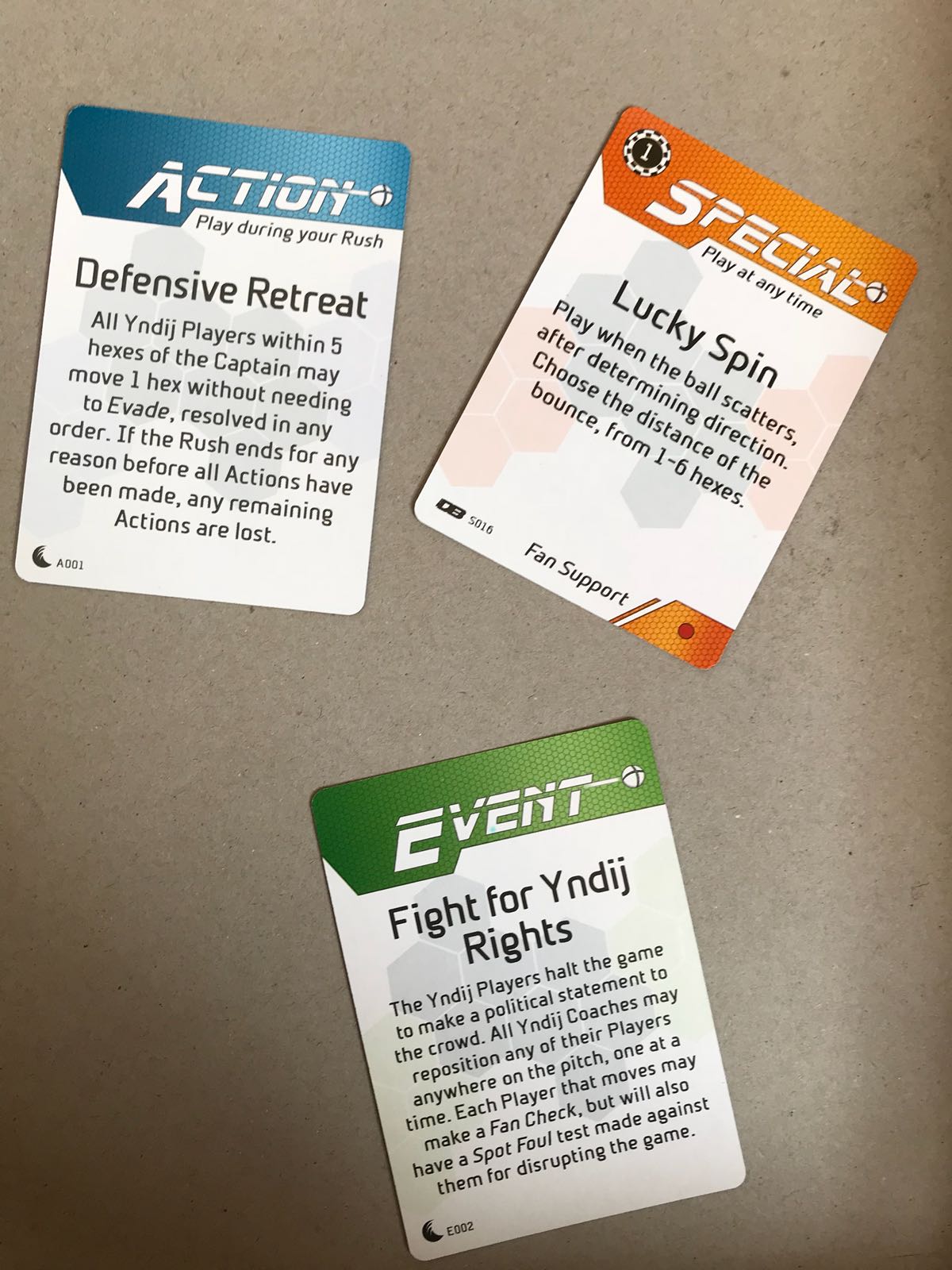 The overall quality of the game is good, and whilst the detail on the minis is great, I found that some of the different types of players looked pretty similar and at a quick glance it could be difficult to discern who they were. So when you’re in the thick of the action it can be a little jarring to have to keep picking up the minis to check who is who. I guess if you were to paint them – which they’re clearly primed for, you could make them a little more unique. Other than that everything feels great quality throughout with good quality card which feels nice a robust.

The thing which probably annoyed me the most about the game – and it’s not really a huge thing, was the ball, it’s tiny and fiddly and annoying. You have to put the ball in each minis base when they’re carrying it – which makes sense, but it just becomes a pain to do and it feels a little unnecessary to have to keep moving around to the bases. But when you think about it, if that’s my main gripe about the game, they’re doing alright!

Dreadball is fast paced with a great competitive side to it that’s fun, and not overly punishing with the random rolling of dice. I enjoyed planning it, but it does feel like a game that might want to spend a bit more money on to get a few more teams to try out. If you’re in to games like Blood bowl then you’re probably going to get on very well with Dreadball.